Last September (2007) I wrote about Emily's 20th birthday. The morning after Christmas, 2007, though, she had a massive stroke and died. Though at 20 years, she was very old, her death was still quite sudden.

We miss her immensely. 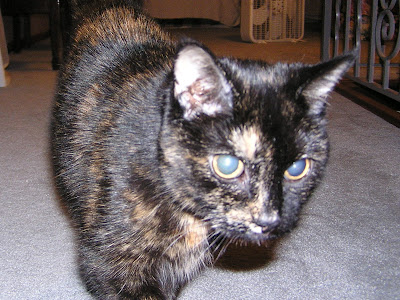 We also found the house to be so very quiet, just too quiet. And though we knew we could never replace Emily, we began to realize that we needed to bring another little one back into the house. I had thought we would wait until the fall, but that just wasn't going to happen. My boss told me about one of their cats that needed a different home, a more settled and quiet place, and we decided we couldn't wait until the fall, the time was now. So we went to meet our new cat, it was decided that we would call him Nick.

Nick has such a bittersweet/sad story; He was adopted by my boss's partner about 7 years ago from the Licking County Animal Shelter, where he arrived after being rescued from a his original owners who raised him for about a year in a closet (why, oh, why do people do stupid thing like that?). She took wonderful care of him and tried to look after all of his needs, but he is a bit scared and skittish, even after all these years, and was afraid of some their other animals, especially one other cat that completely terrorized him (strangely, that other cat looks a lot like Emily did...).

We brought him home on 3/27, and after a couple of days, he began to make himself right at home, claiming my side of the bed as his own: 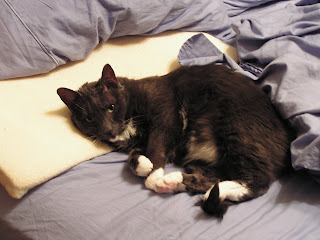 In the month we've had him, we've found out that he's just a great big ol' baby, sweet, gentle and very loving. He absolutely loves to be be held, cuddled and pet, purrs very loudly and will rollover and cover his eyes while getting a belly rub. 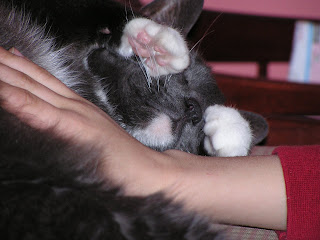 Nick's mostly calm and relaxed now, though he's still a bit scared of people walking around him, and he REALLY doesn't like the doorbell or the vacuum. Overall, though, he's settled in real well and our house feels complete to us again.

KC and the Giggleman Kitties said...

KC said...
O, your noo kitty, Nick, is so cute.
Emily was a real beauty, i knows you misses her.
i's a reepurrter fur tha Cat Blogosphere, an i'll mention this post, and Nick, on Fridays Noos.
Lotsa Purrs to you & Nick,
KC

KC and the Giggleman Kitties said...

Welcome Nick - you look like a handsome tuxie boy!

Hi Nick, you are very sweet, I'm sorry you had such a rough start to your life, but I'm happy you now have a loving, safe forever home.

Astrid (…and the kitties too) said...

Hi Nick, KC sent us over to say Hello! Nice to meetcha! You look like a very handsum guy!

momma wants to cuddle you and snorgle your tummy" *hehe*

Hi Nick
We saw KC note about you and decided to stop in and send a big ol' welcome to the blogosphere. Hey I'm a tuxie too. I am so glad you have a furry special home now that is better suited to you and you will get all the cuddles you need.
The cat that came before you Miss Emily sure was a beauty. I am sure she led you to your new home...

The Misadventures Of Me said...

Your new furever home sounds great especially for you. Some of us kittys on the blogosphere had a rough start too, and we now have loving furever homes.

Mommy Bean loves your floofy belly and big feets (Shadow here has them too).

Hi Nick! I'm Mickey . I am happy you got a new forever home. You look like you are settling in very well!! That's great!!!
Purrs Mickey

Hi Nick! We would love for you to come and visit our blog! We are so happy that you found your Forever Home. You are quite handsome!

Nick, it's so great to meet you! Your story made my mom's eyes leak, and so did the picture of Emily because she looks exactly like our Bridge kitty, Hooter, who left us at age 19. Please come visit us anytime -- you'll like it here because our doorbell is broken and my mom avoids vacuuming until we're all suffocating in cat hair!

Nick looks fabulous. How wonderful that he got to come and live with you!

Welcome to the blogosphere! i am so glad you have a quieter home where you are feeling comfortable enough to let your purrsonality shine through!

Hi, Nicky, and concats on finaly finding your furrever home. It took you a bunch of tries, but it looks like it was worth it.

You planning to have a blog of your own?

Hi Nick! KC sent us over from the Cat Blogosphere. It is very nice to meet you! We are really glad you have found your forever home where you can be comfortable and enjoy life.

For Our Troops:
NEVER FORGET
EVER HONOR

Other places I visit